The Village of Wilton Manors, population 350, was born May 13, 1947. Town Marshall Harley Sanderson initially handled law enforcement. When he retired in November of 1949 Mark Mitchell Jr. took over as Marshall. Officer Floyd Miller was hired by the Village Council in February of 1950 and had a patrol car and police radio to protect the 883 villagers and 250

homes. When Officer Miller left in October of 1950, the Broward County Sheriff's office appointed J. Marvin Brown as Deputy for the Village. It was during this period of time law enforcement protection for the village was not set up for 24-hour immediate service. In the 1951 "Wilton Manors Bulletin" newspaper listed the emergency phone number for the village police and fire protection and states "...or blow siren stationed on Manor Market Building. Fire Blow 4 times. Police Blow 2 times". In 1952 Richard Beaney became the first Chief of Police. By 1954 Chief Beaney was able to have a five man police department. The police department and several city departments shared a 20' x 60' office area located at 2197 Wilton Dr. If the: police department was closed, the telephone would ring at Chief Beaney's home.

In 1956 Chief Beaney created the departments first manual for rules and regulations. In June of 1957 Thomas Brace was promoted from within the police department to Chief of Police. It was under Chief Brace's watch that in 1957 the

months later. Scott was 30 years old when taking over the reigns and was the youngest police chief in the State of Florida. He managed the 21-employee department until 1989 when Stephen P. Kenneth was promoted. Chief Kenneth held the office until retiring in 1999. Richard Wierzbicki was promoted Police Chief of the 42 person department consisting of 31 sworn officers and 11 civilians. It was in January of 2006 when the City hired Chief Richard E. Perez from a nationwide search. Chief Perez is the eighth Police Chief in the history of Wilton Manors. Chief Perez was in attendance at the July 22, 2008 ground breaking for the new City Hall/Police Station.

In 2011, Broward Sheriff’s Office District Chief Paul O’Connell retired from BSO and accepted a position as the Wilton Manors Police Department’s new Chief of Police. Among the many awards and accolades Chief O'Connell was selected by the Anti-Defamation League for its 2013 ADL Florida Excellence in Law Enforcement Award and honored by the Urban League of Broward County as a 2021 Champion for Change.  Chief Paul O'Connell retired from the Wilton Manors Police in April of 2021 after 44 years of Police service. 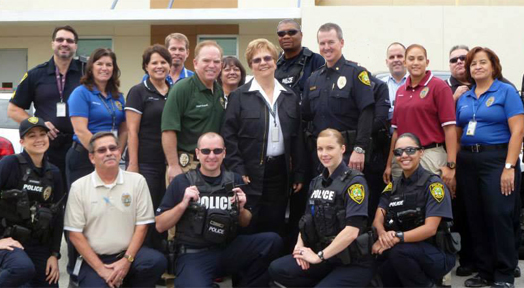 Since 2021, the Wilton Manors Police Department had been under the direction of Chief Gary Blocker. The Police Department consists of six Sergeants, six Detectives, nineteen sworn Officers, and seventeen civilian employees. Calls for service within the city of Wilton Manors are dispatched by the Broward Sheriff's Office County-wide communications center.